The T-10 extended skirt parachute was standardized by the U.S. Government as a troop personnel parachute in the early 1950’s, and has been used successfully since that time with relatively few modifications. 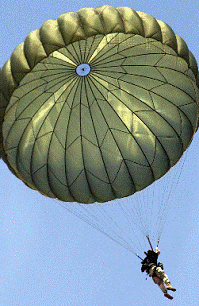 In 1976, a major change was made to the basic canopy with the addition of:

In 2006, all T-10C assemblies material color was changed to the new U.S. Army color Foliage Green #504. In addition, the Pack Assembly P/N 62J4342 was revised by adding one (1) each Static Line Stow Bar to each side of pre- sent webbing loops used for stowing the Static Line. These new Stow Bars are used for additional stows at the folded ends of 15’-5” yellow Static Line. A static line is attached through the break cord strap on inside of the bag under strap pocket and around deployment bag main strap or attached directly around the deployment bag main strap if the break strap is eliminated.

In 2000, the T-10D was introduced. The T-10D assembly incorporates a detachable deployment bag. The new bag includes:

The universal static 15’ or 20’ static allows a soldier to be dropped from several different aircrafts.

The chest, back, and leg straps permit size adjustments. Each riser is 30 inches in length with the male fitting of the canopy release permanently attached.